Your Moon Chart will Define Your Success Of Wealth by Signifying YOGAS. 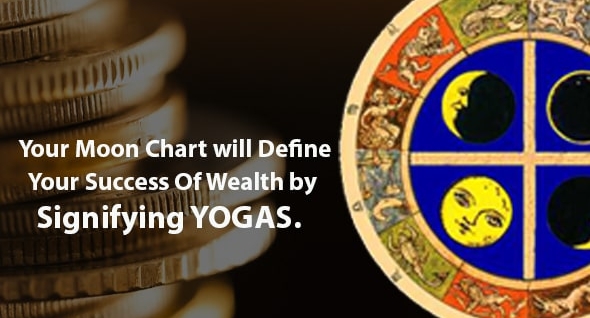 The Nine Planets and their effects on a native as a result of their placement in the native's horoscope or Kundli constitute the foundation of astrological study. These Nine Planets are immensely influential in molding a person's existence.

Sometimes they exaggerate by claiming that "the Nine Planets are the celestial body that how his/her life would be related to the destiny will play a major key role in this."

The Moon's Importance
Only if our minds are joyful and calm can we claim to enjoy a happy and tranquil existence. Chat with Astrologer, All the pleasures and comforts of this earthly life are pointless unless a person is in a pleasant state of mind.
The Moon is the most significant planet in Vedic Astrology because it represents the mind. When evaluating a native's horoscope or Kundli, an astrologer places a strong focus on determining what the planet Moon means to the native.
An astrologer analyses a native's Chandra Kundli to acquire a complete understanding of the Moon's position in that native's horoscope or Kundli, as well as its impact on that native. Vedic astrologykart.com website offers a free consultation.
The Chandra Kundli is the Kundli that is produced by retaining the Moon as the core or major focus point. This Kundli type exposes in great detail what the planet Moon has in store for a person, particularly in terms of that person's mental condition and inner nature.

How Is the Moon Examined?

In a Chandra Kundli, there are several astrological permutations and combinations that eventually define the Moon's effects on a native.

When an astrologer reads a person's Chandra Kundli, he or she looks at the following:

The Moon is in the House of the Moon.

Critically, Moon must be put in a home that is beneficial to it. When the Moon is in the 6th, 8th, or 12th houses of a horoscope, it causes issues in one's life and loses its benefic qualities. A Moon in a house with a fiery element associated with it aggravates the Moon, causing turmoil in a person's life, particularly in terms of his or her mental health.

The Moon is conjunct with the planets.
When the Moon conjuncts inherently malefic planets like Saturn, Rahu (Moon's North Node), or Ketu (Moon's South Node), it upsets one's mental calm and causes bewilderment and uneasiness. As a result, favorable planets like Jupiter or Venus, as well as the Moon, must be present in a house.

Planets in opposition to the Moon
Astrology Advice Online, Aspects of planets have an important role in deciding the overall outcome of the planet on which the aspect is being cast. When nasty planets such as Mars or the Sun make an aspect on the Moon, the local has severe mood swings and frequently loses his or her temper.

The Moon is Present in This Sign
It is a vital role of the Moon to be placed in a suitable environment. When the Moon is in a horoscope's 6th, 8th, or 12th house, it causes problems and loses its benefit attributes. The Moon becomes aggravated when it is in a house with a fiery element, bringing chaos in a person's life, especially in terms of mental health.

The Moon's own sign (Cancer) is present in this house.

The Moon rules the watery sign of Cancer, which is highly powerful and embodies many of the Moon's characteristics, such as emotions, feelings, creativity, healing, sensitivity, mental health, and thinking. If this sign appears in the 6th, 8th, or 12th houses of a horoscope, or in houses aspected or dominated by malefic or cruel planets, the Moon bears the brunt of the malefic influences generated by such planets, regardless of where it appears in the horoscope.

The Moon's Nakshatra
The NAKSHATRA in which a planet is placed has a significant impact on its final result. astrology advice, According to the website astrologykart.com In the case of the Moon, an astrologer looks at the nakshatra in which it is positioned to see what influences the planet that rules that nakshatra has on it. The ruler of the Nakshatra must be in harmony with the Moon or be placed in the Chandra Kundli in such a way that the Moon gains enormous positive strength and benefits the native in terms of its natural characteristics as well as the domains of the native's life that it represents as per its placement in the native's Kundli or horoscope, Talk to Astrologer.

By now, you should have a good understanding of how vital it is to know the condition of the Moon according to your Chandra Kundli and what you may expect from this life-changing planet.