Know the Importance of Doing Puja Gupta Navratri and Its Method 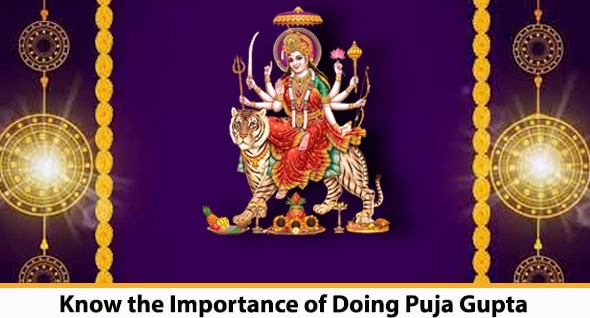 Gupta Navratri is getting started from today 2nd February however the Ashwin and the Chaitra month Navratri are widely celebrated all across the country. There are other two secret Navratri Tantras that come in the year which is considered as important as the two as it helps to accomplish the mantras. Navaratri signifies the four Yugas. Talk to Astrologer

Different Navratri in the four Yugas

According to Markandeya Purana, Chaitra Navratri has been important in Satyug. At the same time, there has been a time of secret Navratri of Ashadha in Treta and its recognition has been more. On the other hand, in Dwapar Yuga, there was a time of Gupta Navratri of Magh month, while in Kali Yuga, the recognition of Navratri of Ashwin month has been more. These four Navratri are the symbols of four eras. During these nine days, the devotees of Maa Durga observe puja and fast to please the mother and get her blessings in their lives.

Worship of ten Mahavidyas of Goddess

We know that Navratri, 9 forms of Mother Durga are worshiped every 9 days. The ten Mahavidyas of Devi whose names are Kali, Tara (Goddess), Chhinnamasta, Shodashi, Bhuvaneshwari, Tripurabhairavi (Tripur Sundari), Dhumavati, Baglamukhi, Matangi, Kamala. They are worshiped every day. Chat with Astrologer, these ten Mahavidyas of Goddess are very effective, which make everything in the world accessible to the seekers.

How Gupta Navratri will change your life?

The practice of these ten forms of Goddess has special significance in Tantric activities and Tantra Sadhana. This time Magh Gupta Navratri has started in Dhanishta Nakshatra. This year there is also a coincidence that Gupt Navratri will last for 9 days. During Navratri, Rahu, which affects tantric powers, is situated in its exalted sign Taurus. After 19 years this kind of coincidence has happened. Shani who is the son of Sun God will stay together in  Capricorn during Gupt Navratri. For doing any kind of Sadhana this is considered to be an auspicious coincidence. Many auspicious coincidences are also being made during Gupta Navratri which of these are, like Ravi Yoga is on 3rd, 5th, and 6th February and Sarvartha Siddhi Yoga is on 6th, 7th, 8th, and 10th February.

• In Magha Navratri the people worship the Goddess of Tantra Mantra at midnight.

• Place an idol of Goddess Durga in a clean and higher place.

• Cover that idol of Goddess Durga with a red cloth and offer red colored vermilion.

• Offer all the makeup setups, red flowers, coconut, and fruits to the idol Maa Durga.

• Offer some bhog (food) to the Goddess Durga.

• By lighting a lamp chant the mantra “Om du Durgayi Namah” and after that recite Durga Saptashati or Durga Chalisa.

• Do the puja method wise and after that do the aarti of Maa Durga.

• People who were involved during the puja offer them with the holy offerings i.e. (Prasad) after the puja.

For more details, you can visit the astrology kart website and take Astrology Advice Online.