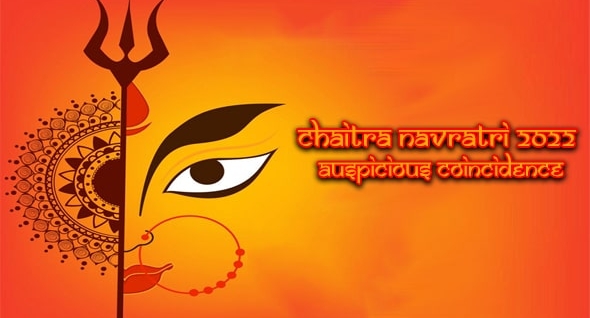 Chaitra Navratri 2022 Auspicious Coincidence: The Hindu New Year begins on the Shukla Pratipada day of Chaitra month, according to the Hindu calendar. This year's Hindu New Year, Nav Samvat 2079, will begin on Saturday, April 02. Guru will be this year's King Shani Dev and Minister. Astrology Advice Online, Mother Durga is riding a horse to the residence of her followers on this Chaitra Navratri in the Samvatsar named Nal.

This Chaitra Navratri will last 9 days since dates do not expire. The Hindu Nav Samvat 2079 will begin with Revati Nakshatra and three Raja Yogas, which are considered to be exceptionally good signs in astrology. With Chaitra Navratri spanning nine days and the formation of beneficial Rajayoga, this Navratri will bring happiness, prosperity, and the fulfillment of dreams. Aside from that, in the month of April, all nine planets' zodiac signs will change.

On the occasion of the Hindu New Year, this is a rare occurrence.

A favourable coincidence of numerous planets is being formed, according to astrologers, at this moment at the beginning of Vikram Samvat 2079. In the beginning, Mars and Rahu-Ketu will be in their exalted positions, while Shani Dev, the planet of justice, will be in his zodiac sign of Capricorn. The conjunction of Saturn and Mars in the horoscope of the Hindu New Year Chaitra Pratipada Tithi gives excellent indicators of increased luck and wealth.

After 1563 years, astrological computations by astrologers have resulted in such a combination of these planets. In such a case, the persons born under the signs of Gemini, Libra, Virgo, and Sagittarius would benefit greatly from the effects of this yoga. Talk to Astrologer, however, because the Hindu New Year begins in Revati Nakshatra this year, the entire year will be advantageous for trades, investments, and earnings from a commercial standpoint.

Shani will be king and minister in New Samvat 2079.

It'll be In addition, the Samvatsara's abode will be the potter's house, and the horse will be the vehicle of time. Because King Shani Dev Raja and Devguru Brihaspati are ministers in Vikram Samvat 2079, this Samvatsara will be straightforward and usually fortunate. Shani Dev is regarded as the judge and doer of actions among the planets, according to astrology. Shani Dev will play a key part in obtaining justice this year in such a circumstance. Devguru has been appointed to the same cabinet position. It will be beneficial in enhancing auspiciousness and pleasant energy in such a circumstance.

The zodiac signs of all nine planets shift at the start of the Hindu New Year.

The zodiac signs of all nine planets will shift on Chaitra Shukla Pratipada day, which marks the start of Navratri and the Hindu New Year 2079. This is an extremely uncommon occurrence. To begin, Mars will transit in Aquarius on April 7th, halting its path to Capricorn, while Mercury will enter Aries on April 8th. Rahu Ketu's zodiac sign will shift on April 12th.

Dev Guru Brihaspati will leave the original triangle sign of Saturn on April 13 and enter his zodiac sign of Pisces. After that, on April 14, the Sun's Sankranti will be in Aries. Then, on April 27, Venus enters Pisces, and on April 29, Saturn enters Aquarius. Chat with Astrologer, Changing the zodiac sign of all the planets in the same month represents a significant shift. At the same time, the Moon's zodiac changes every two and a half days. As a result, the zodiac signs of all nine planets will shift during the month.